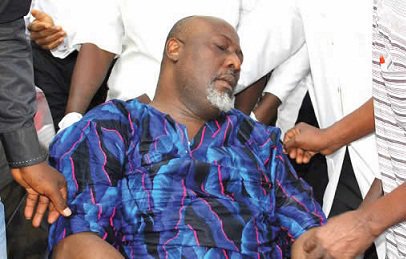 The Department of State Services (DSS) has denied that its operatives abducted Senator Dino Melaye as alleged in some media.

A statement by the Public Relations Officer of the service, Mr Peter Afunanya, said that the police brought Dino to its medical facility.

“The Service wishes to state that the information, as being misrepresented by sections of the media, is far from the truth,”he said.

Afunanya added that there was no time Dino was abducted by the service.

“The fact is that it was the Police that brought him to the DSS facility after obtaining a 14-day detention warrant with effect from January 9.

“The aim of bringing him to the Service’s facility is to complement Police efforts in giving the Senator a deserved medical attention,” he said.

He explained that the Service accepted him in line with medical ethics and spirit of inter-agency cooperation.

The spokesman said the clarification became necessary to address the allegation that hooded men suspected to be DSS operatives abducted him from the Police hospital.

“The DSS, therefore, reiterates and assures the public of its commitment to professionalism and respect for human rights in its operational engagements,” he said.

Force Spokesman, acting DCP Jimoh Moshood had earlier explained in a statement that the controversial Senator was moved to the DSS facility in Abuja, for further medical attention.

He said despite claims by the embattled Senator, the police medical team has been unable to find anything to confirm he has any infirmity that could delay his trial in Lokoja.

“On the 9th of January, 2019 we got a High Court Remand Warrant to keep him in police custody for fourteen days.

“The police medical team at our facility examined him and concluded that he was okay to stand trial but he is insisting that he is not okay; that is why we are taking him to another government hospital.

“He has been taken to the DSS hospital and he will be returned to us after their medical examination because he does not have any case with SSS.

“He only has a case with the police and we are going to take him to court within the period covered by the Remand Warrant.

“He will be taken to court within the period because the Remand Warrant is from an FCT High court, which gives us the permission to keep him in police custody for 14 days.

“He was only taken to their (SSS) hospital; he is not in their custody.

“Our people have examined him and we want another government hospital to also examine him and give a medical opinion.”

Melaye had reportedly collapsed after surrendering to the police who had laid an eight day siege on his residence for allegedly failing to honour its invitation with regards to accusation of attempted culpable homicide.