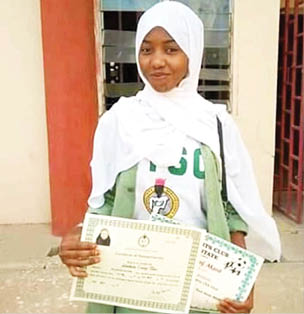 It was a tragic day in Bauchi on Friday, 28 December 2018, when a bride-to-be suddenly died a few hours to her wedding fatiha scheduled to hold on Saturday, 29th December 2018 by 11am at Gwallaga mosque. The families of Engineer Salisu Alhaji Boyi and Alhaji Abdulkadir Tataru had completed all arrangements for the wedding in Bauchi, but her funeral prayer was conducted in the same mosque, same time, because she died on the eve of her wedding.

Late Fauziyya was buried on Saturday, after the funeral prayer conducted at the Gwallaga Jumma’at Mosque that would have been the venue for her wedding fatiha.

Daily Trust Saturday traced the families of the deceased and the groom, who narrated what actually happened to late Fauziyya Abdulkadir Tataru, who was a Quantity Survey graduate of the Abubakar Tafawa Balewa University, Bauchi State.

In his account, father of the deceased, Alhaji Abdulkadir Tataru said: “Fauziyya died after a protracted illness. She was ill for some time, soon after her wedding invitation cards had been distributed and all arrangements had been concluded for their wedding fatiha. Before Thursday, she stopped eating anything, and as a result, medical doctors put her on drip that Thursday and through Friday. When she asked for it to be removed, one of her sisters, who is a nurse, said they will do so only on condition that she agrees to take pap. She agreed and it was removed. She drank the pap, talked to everyone around in the house, but after Magrib prayer I was told that she passed away. From Allah we come and to him we shall all return.”

Alhaji Tataru said: “Late Fauziyya memorized the Holy Qur’an, and that she lived in peace with everybody. She also lived an exemplary life, was religious and attended both western and Islamic schools and had started her second degree in Quantity Survey.”

AbdulJalil said while in school, whenever her brother did something that upset her, he was the one who calmed her down and made sure that she was happy. “That is how we started before Fauziyya was transferred to Bauchi where she completed her secondary school at Abubakar Tafawa Balewa University International Secondary School, Bauchi. She then went on to Abubakar Tafawa Balewa University and graduated as a Quantity Surveyor. She served in Maiduguri and later enrolled for her master’s degree.” 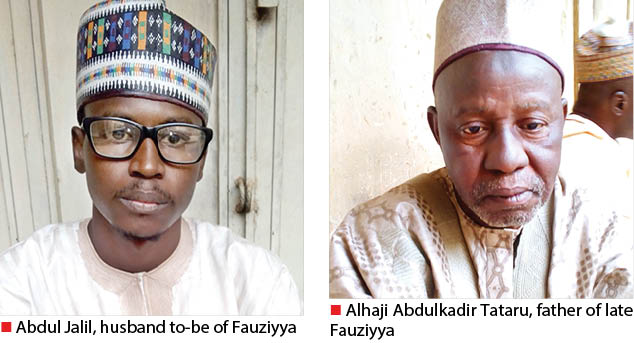 AbdulJali was shocked when he was told that Fauziyya died, but he did not dispute the information. “Because I know nothing is beyond Allah’s will. I went and saw her corpse. As Muslims, we believe in destiny, both good or bad. I believe what had happened to Fauziyya is our destiny and that is how Allah wants it. We can’t do anything except pray for her,” he said adding that the demise of Fauziyya became a milestone in his life.

“I will do my best to console myself and the people around me,” he said. “I will submit everything to the almighty Allah, because everyone has what God has decreed for him. I will never forget her and will continue to pray for her. I will continue to live and try to make progress in my life. I will not say I will not marry again, I have submitted everything to Allah. I will do my best to live a normal life by the grace of Allah.”

According to AbdulJalil, “The way she died and the circumstances is a lesson to all humanity. It is not a small thing, it’s a very big event that has happened. We have no choice but to believe and be patient with the will of God. May Allah forgive her and have mercy on her, and may her soul rest in perfect peace.”

Elder brother of Fauziyya, Abdul Malik Abdulkadir Tataru, who was a close friend and classmate to Fauziyya’s husband-to-be said they are seven in their family, and he is the first born, while Fauziyya was the second. He said since they grew up, he had not seen anyone quarrel with his late sister. “She is kind-hearted, and tries her best to put smiles on people’s faces. You never see her angry, and she works hard not to offend. We lost a rare gem but take it as being from God.”

Abdul also added that her husband-to-be is his friend and if Allah wills, he will marry from their house because he is now a relative.

Immediate younger brother of late Fauziyya, Sabi’u Abdulkadir Tataru, described her as the centre of unity in their family. “She was sick for about two weeks and I saw people posting on social media. She didn’t have the opportunity to participate in her wedding preparations, but watched people doing so,” he said.

Sabi’u said she was always the first person he contacted if anything happened to him and she always gave him sound advice. “We are all very close to her and she advises all members of our family,” he said.